Well, it’s been a while, but here at last is the promised solution to the treadmill puzzle posted here. I saw a version of the puzzle here (in the midst of a great discussion of extreme examples and counterexamples) at the excellent blog of Dave Richeson, who cites The Futility Closet.

Here is the puzzle:

Alice and Basil are bored while waiting in an airport. They decide to play a game with one of the nearby “moving sidewalks” (treadmills).

The treadmill is much longer than the distance y. And the treadmill moves at a constant speed x.

Who wins this race?

One line of reasoning is that Alice and Basil should finish the race in the same time, because Alice is helped by the treadmill in one direction and hindered in the other direction, and the two influences should cancel. However, this is incorrect reasoning, because the two influences do not cancel, as the following calculation (based on comments here by The Stochastic Seeker and Nick) shows:

The time needed for Basil to complete his round trip is

The time needed for Alice to complete her round trip is

Now it’s time to notice that if $x = v$ then the expression for $t_A$ makes no sense; but this is reasonable physically, because in this case on the return trip Alice’s speed with respect to the unmoving floor will be zero, meaning she will never return to her starting spot. Similarly, if $v < x$, then Alice never makes it back to her starting point. Thus, a reasonable domain for this problem is that $v > x \ge 0$.

The difference between the two times is

An alternative, mundane, approach would be to take the initial expression for $t_A – t_B$ and determine its stationary value using calculus. By differentiating the expression with respect to $x$, and using either the first-derivative test or the second-derivative test, one can determine that the minimum value of the expression over the relevant domain is $t_A – t_B = 0$, and that it occurs when $x = 0$. I’ll let interested readers fill in the details.

I think part of the reason for the incorrect reasoning given above is that there is an urge to average Alice’s two speeds like this:

Since this “average” speed of Alice is the same as Basil’s speed, this leads us to incorrectly think that their race will end in a tie. The problem is that this “average” is not very meaningful, and not appropriate in this situation. Perhaps part of the reason for this urge to use this inappropriate kind of average is that in typical first-year mechanics classes, one almost always deals with motions that have constant acceleration, where the average speed for a motion in one direction is simply half of the sum of the initial and final speeds. But one almost never deals with round-trip situations such as this one in first-year “textbook” problems.

The mathematical reason for this type of average being inappropriate is found by examining the calculation given above. The speeds appear in the denominator, not the numerator. For the same reason that

(because you can’t just average 2 and 4 to get 3 when they are in the denominator), you can’t just add Alice’s two speeds and divide by two to get her true average speed.

For example, suppose that Basil’s constant speed is $v = 3$ units, and the speed of the treadmill is $x = 1$ unit. Then Alice’s average speed is $\overline{v} = \dfrac{3^2 – 1^2}{3} = \dfrac{8}{3}$ units, which is a little less than Basil’s speed. This is consistent with the previous calculation that showed that Basil wins the race if the treadmill is moving.

In the example of the previous paragraph, Alice’s two speeds are 2 units and 4 units, so we are “averaging” 2 and 4 in a funny sort of way to get $\dfrac{8}{3}$. This funny sort of average is called the harmonic mean.

We’ve already remarked that in this situation it’s inappropriate to add up Alice’s two speeds and divide by two. Is it ever appropriate to use this arithmetic mean of her two speeds? Yes. If Alice were to move at a constant speed $v_1$ for a time $t$ and then move at a constant speed $v_2$ for an equal time $t$, then her average speed for the entire trip is

The arithmetic mean can be used to calculate the average speed for a trip consisting of more than two legs, as long as the time needed for each leg is the same. This is different from the treadmill example, where the distance is the same for each leg of the journey, not the time.

It would be nice to have an intuitive physical understanding for why Basil beats Alice. One way to think about it is as follows: Alice’s average speed is a kind of weighted mean (where $v_1$ and $v_2$ are Alice’s speeds for the two legs of the trip, and $t_1$ and $t_2$ are the corresponding times):

There is also a nice intuitive mathematical understanding for why Alice’s average speed is less than the arithmetic mean of her two speeds, as pointed out in the comments here by Nick. Consider the following diagram, where $T$ and $V$ are generic variables. 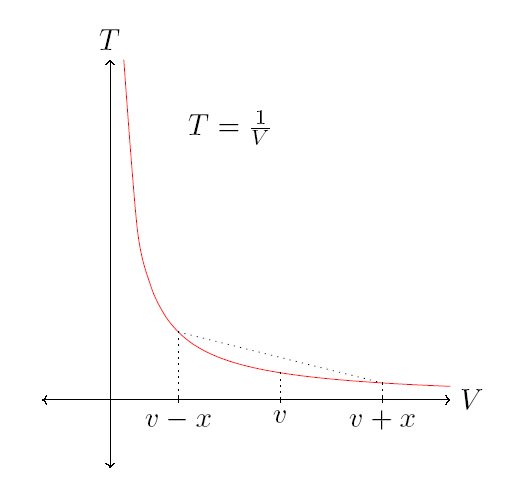 As Dave Richeson notes, the problem-solving strategy of examining extreme cases is effective for this problem. For example, an extreme case is $v = x$; in this case, Alice’s walking speed is the same as the treadmill’s speed, and so she never makes it back to the starting point, which suggests that she should lose the race no matter what the value of $x$ is, for $0 < x < v$.

Finally, it’s worth mentioning the resemblance of the harmonic mean formula that can be used to solve problems of this type (that is, determining the average speed for a motion with $n$ legs, each of which is at a constant speed $v_i$) with the formula for the effective resistance of a number of resistors connected in parallel. The two situations are completely analogous, but the standard descriptions differ a bit.

In the case of resistors in parallel, the voltage $V$ across each resistor is the same. The total current through the network is $I$, where $R$ is the effective resistance of the network:

For a journey of $n$ legs, each covering a distance $y$ at a constant speed $v_i$, the average speed $\overline{v}$ is related to the total time $t$ by

(This post first appeared at my other (now deleted) blog, and was transferred to this blog on 21 January 2021.)

3 thoughts on “Round Trip On A Treadmill; Updated With Solution”